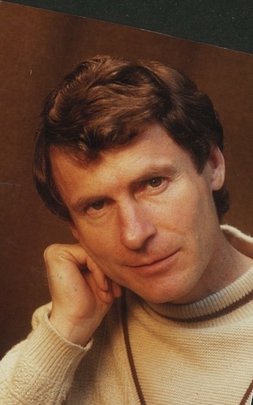 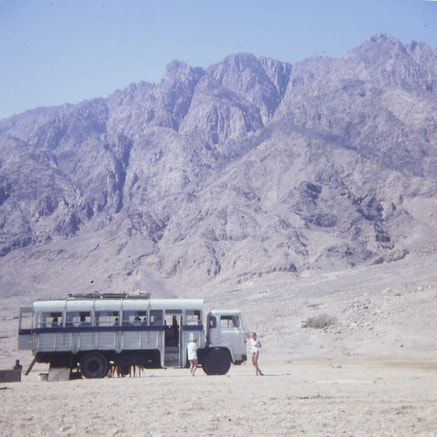 Kibbutz truck in the Sinai
Two young kibbutzmen (made-up word) took all of us volunteers on a tour through Israel in the kibbutz truck. One of our first stops was the Golan Heights. When we got out of the truck to look around, one of the volunteers wandered off the beaten path. The kibbutsmen yelled at him to get back on the path. There were landmines throughout the Heights. The cows that had been put out to graze there had not yet stepped on all of the mines. (I didn’t see any three-legged cows.) I couple of years later in Jerusalem I met a young American who had lost a foot from stepping on a landmine on the Golan Heights.
On our way to the Sinai, we visited Deir el Quruntul (the Monastery of the Temptation) near Jericho. The kibbutzmen had advised the ladies to bring long dresses or skirts on our trip as they wouldn’t be allowed to enter the monastery wearing shorts. When we arrived at the monastery, we found that us men also couldn’t enter wearing shorts. So the ladies went in first wearing their skirts or dresses while we waited outside. When they returned, they stripped off their skirts and dresses and lent them to us so that we could enter. I observed the widening eyes of the monk who had guided the ladies out and was waiting to guide us in. (The ladies were wearing bathing suits underneath.)
Another stop was at Masada, a fortress on a hilltop where the last of the Jewish freedom fighters held out against the Romans. There is a cable car to the top but we climbed up, and it's quite a climb! From the walled plateau, looking down on the west side, we could see the giant siege ramp that the Romans built in order to capture the fortress. They used Jewish slave labour to built the siege ramp so those in the fortress didn't want to shoot down on them to stop them. If they had been short of arrows, they might have catapulted stones. But they didn't. I thought that the freedom fighters should have heightened and reinforced the west wall with stones when they saw the siege ramp being built. But it's all too easy now to speculate on how they might have done better.
In the Sinai some of us went snorkeling at Nuweiba on the Gulf of Eilat (otherwise known as the Gulf of Aqaba). The eastern side of the Sinai Peninsular was then still under Israeli control. In the Red Sea, life is colourful and abundant, whereas on land vegetation is sparse and drab. We slept in sleeping bags on the ground. Near the sea, nights are warm, though inland they are cooler.
We didn't doddle on the return trip to the kibbutz.
Being older and more conservative than the other volunteers, I didn’t fit in so well with the party life. There was in fact too much partying and not enough work. Beit Oren would later be the first kibbutz in Israel to go bankrupt. So I decided to move on. Having saved up most of my clothing allowance and having sold most of my tuck shop vouchers to other volunteers, I had enough to catch a bus to Jerusalem and get established there.
In Jerusalem I contacted the Emissaries with whom I had previously associated. Christians would call the Emissaries a cult as they have a mystical interpretation of Scripture. For me, communal living was the attractive part of my association with them.
I moved in with a couple of Israeli Emissaries living in a suburb of Jerusalem, Ein Karem (Spring of the Vineyard). Ein Karem is supposedly where John the Baptist was born. Consequently there are several Christian churches and monasteries there. One church, supposedly built over the spot where John lived, is on the north-east side of the valley. Another church, supposedly built over the spot where John also lived, is on the south-west side of the valley. The supposition is that John’s parents, being somewhat affluent, had both a summer home and a winter home. It is more pleasant living on the south-western side of the valley in summer and on the north-eastern side in winter.
The Israelis in my new home were into holistic living. I remember searching the kitchen for a can opener, only to learn that they didn’t have such a thing. We ate a lot of bread as bread in those days was, and probably still is, subsidized. Subsidies are nice for people like myself living on a shoe-string budget, but I still think they are not a good idea. Some farmers in Israel were feeding bread to their cows.
Decembers can be cool in Jerusalem and my room wasn’t heated. I remember trying to read in bed, but my hand that was holding the book got so cold that I gave up and just snuggled under the covers. The first few nights I slept fitfully, waking up every hour. The church bells chimed every hour night and day. After a week or so, however, I didn’t even hear them.
I worked with the Emissaries in construction, even on Christmas Day! Although Christmas isn’t an Israeli holiday, I had expected that they would make allowances for those of us who were from Christian countries. They in fact did. While we were working, the ladies were preparing a sumptuous dinner––a pork roast. Besides Jews at the supper table, there was even a Muslem man. The Emissaries like to unbind people from their traditions. 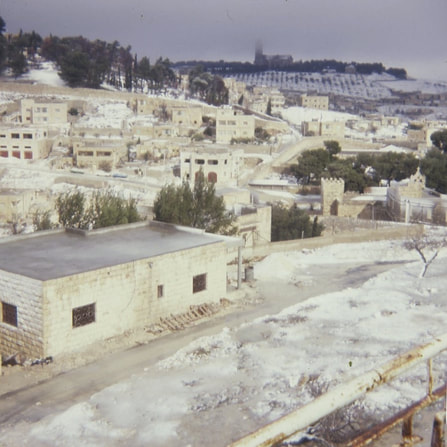 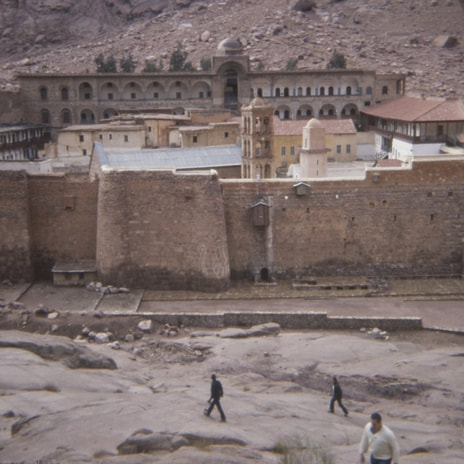 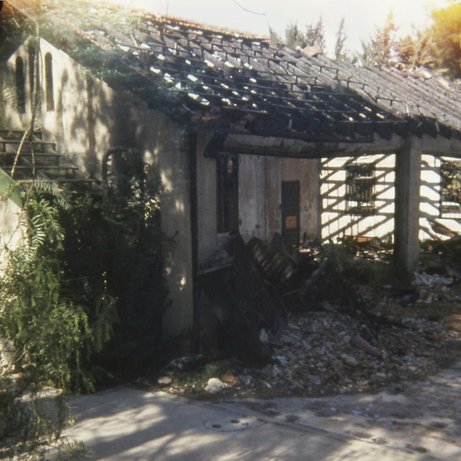